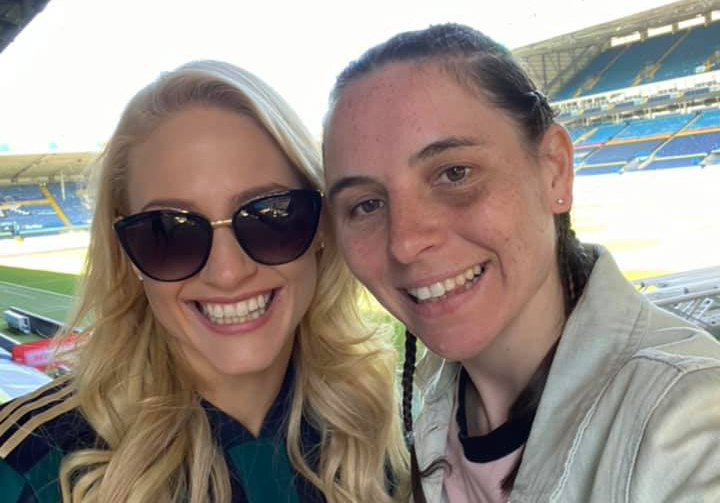 Just over a week after her spirited challenge against Shannon Courtney for the World Boxing Organisation (WBO) Bantamweight World Crown, Australia’s Ebanie Bridges took time out of her busy schedule to spend some time with her good friend Professional Boxing Council (PBC) International Super Flyweight Champion Nicola Hopewell, ahead of Nicola’s headlining LET BATTLE COMMENCE – THE LIONESSES the first all female professional boxing event to take place in the United Kingdom this coming Saturday, 24th April.

Over the three day visit Ebanie was ringside supporting Nicola during her final training session at the XBox Boxing Academy in Worksop, after which the dynamic duo headed to York to meet with indie Rockband Skylights.

Wednesday’s schedule was just as busy as Ebanie and Nicola headed to Liverpool, where they visited The Inclusive Hub, an organisation that provide boxing based training for people with behavioural needs, Down’s syndrome, ADHD, Autism etc.

Later in the day they met up with Natasha Jonas and chatted over coffee about Ebanie’s fight against Shannon Courtney as well as Nicola’s upcoming fight this Saturday and Natasha’s upcoming WBC, WBA, IBF and WBO unified title fight against Katie Taylor on the 1st May.

Yesterday Ebanie and Nicola travelled to Leeds as the Aussie bruiser wanted to visit Elland Road, the home of the Premiership club Leeds United.

Earlier today Ebanie headed to London ahead of her scheduled appearance on Soccer AM tomorrow and Nicola headed up to Aberdeen ahead of her headlining the Lee Mcallister promoted LET BATTLE COMMENCE – THE LIONESSES, in association with Thomson Dairies, Bounty Competitions, RDX, Empire Pro Tape and Go Sports & Entertainment that will take place behind closed doors at the Northern Hotel in Aberdeen on Saturday 24th April 2021 and will be broadcast live and free to view on FITE TV as well as further linear and digital channels globally (please check local listings)

But before she headed south Ebanie took the time to video a message of support not only to her friend Nicola, but also to LET BATTLE COMMENCE – THE LIONESSES promoter Assassin Boxing Promotion and Management as well as Nicola’s Xbox gym mates Hollie Towl and Eleanor Coulson who are also taking part in the historic event.