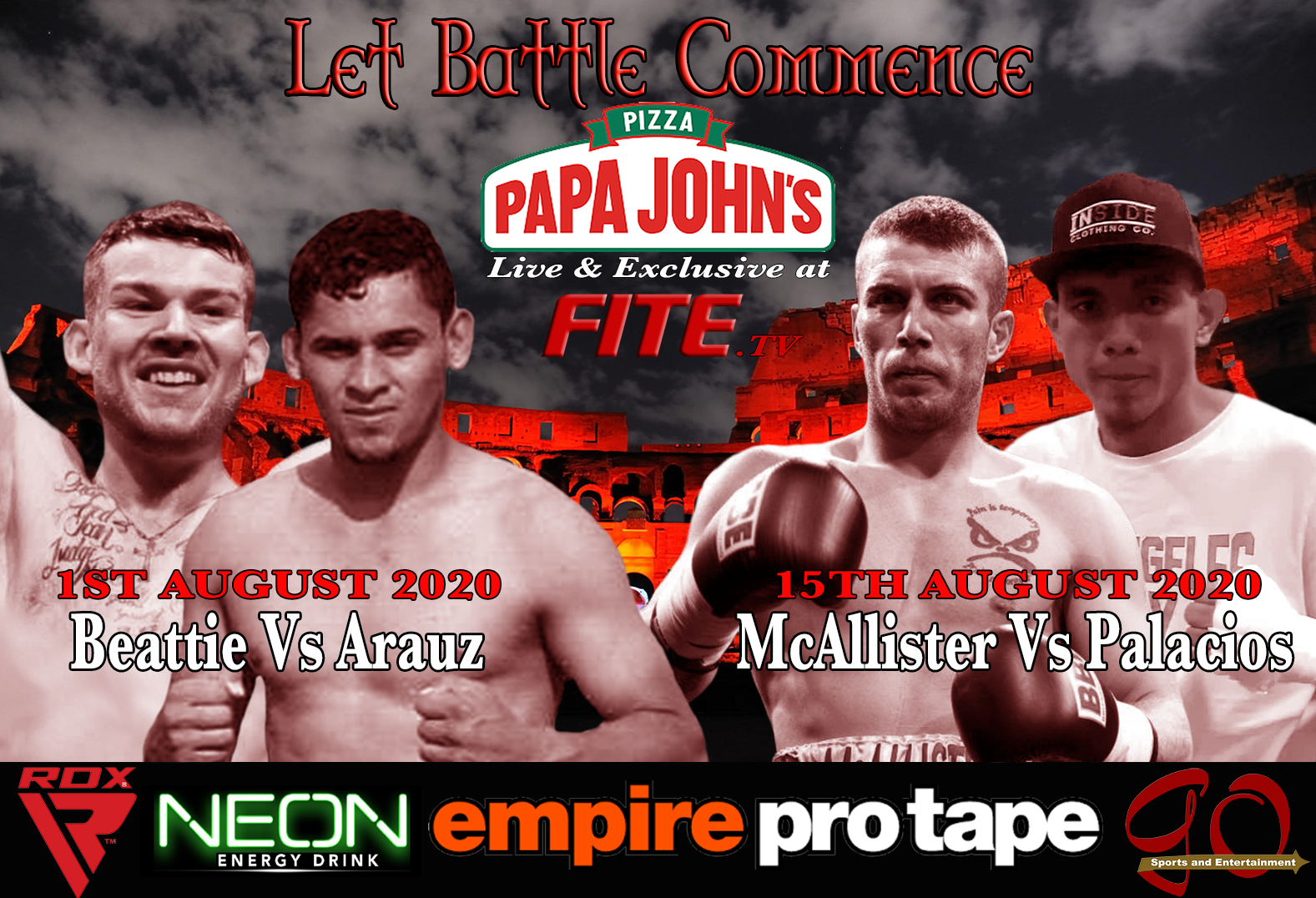 Following the success of the inaugural LET BATTLE COMMENCE, in association with PAPA JOHN’S PIZZA & NEON ENERGY DRINK, that took place at the Northern Hotel in Aberdeen last weekend, promoter Lee Mcallister has announced two more events in the series which will be broadcast live and exclusive on FITE TV on Saturday 1st August and Saturday 15th August 2020.

Back on the 18th July the fans of the pugilistic arts around the world watching LET BATTLE COMMENCE 1 on  FITE TV were treated to the spectacle of the return to the fray by Lineal World Boxing Organization (WBO) Featherweight World Champion Scott Harrison, who faced and stopped Professional Boxing Council (PBC) International Champion Paul Peers in a non-championship six rounder.

The third fight of the night was a fantastic all action War between undefeated Lewis Mulberry and Nicaragua’s Johnson Tellez. I’m sure those watching on TV were as enthralled with the action as much as myself, Mulberry’s ring name is “Machine Gun’ and believe me that is a most appropriate moniker, as the 19 year old peppered the body of his far more experienced opponent with fast and powerful left and rights at a mega rapid pace. After six scintillating all action rounds, Referee Edward Law’s scorecard read 60-54 in favour of the teen sensation Lewis Mulberry.

Prior to Mulberry-Tellez Perth’s Adam Stewart (1-0-0) made his return to the ring against late replacement Nicaragua’s Alexander Zeledon, following an injury sustained by original opponent Liverpool’s Steve Sunners (4-0-0). Earlier this year Zeledon beat Manchester’s Dan Booth (4-1-0), so not an easy opponent, regardless of his negative record, for 25 year old Stewart who returned to the fray following a three year sabbatical.

What a cracking fight, both protagonists went at it hammer and tongs for close to four rounds before Stewart’s power came into play late in the fourth. With around 25 second or so of the round remaining Stewart fired a massive Exocet to send the Nicaraguan to the deck, Zeledon was clearly in pain as he unsuccessfully tried to make it to his feet. Official time of stoppage 2 minutes and 40 seconds of the fourth round.

The opening fight of the night see 18 year old Heavyweight Liam Allan from Aberdeen make his professional debut against Puerto Rican Jose F Leon. Cracking opening round, but in the second Allan’s mature approach, that belied his tender years, really came into play.

As the second stanza progressed, Allan worked behind his superb jab to fashion some good openings, which he took without a second thought. Just about mid way through the  second round one such opening enabled the youngster to let rip with a massive shot that sent Leon to the deck. Leon made the count and boxing resumed, then with around 30 seconds of the round remaining Allan created another opening and once again let rip and landed a big shot to send the South American to the canvas for a second time, the tough Puerto Rican tried to make it to his feet again but just failed to make the count, official time of the stoppage was 2 minutes and 40 seconds.

Denny’s Kevin Traynor (2-0-0) will need to be at his best when he takes on the exciting Greek battler Paris Stavropoulos (2-1-0), who makes his first appearance in the UK.

The second of the August events, LET BATTLE COMMENCE III, in association with PAPA JOHN’S PIZZA and NEON ENERGY DRINK will take place at the Northern Hotel in Aberdeen and broadcast exclusively live on FITE TV on Saturday 15TH AUGUST 2020.

The line-up for the 15th August is:

Six time, Five Division World Champion, and Promoter of the LET BATTLE COMMENCE series, Lee McAllister steps in to replace Malta’s Brandon Borg to face Gerona, Spain based Nicaraguan Edwin Palacios in the headline fight, definitely a much tougher fight for Palacios than what he was expecting, but the macho South American has stated he’s up to the challenge and to expect fireworks.

Nathan Russo versus Wilmer Gonzalez – this highly anticipated clash of the Big Bangers was originally due to have been on the first LET BATTLE COMMENCE show in the series, but had to be rescheduled due to a minor injury suffered by Russo. Without a doubt this is going to be a highly exciting all action contest, how long it’ll last is anyones guess, as Russo has won every fight so far by KNOCKOUT and Gonzalez has 14 KOs on his record, including a huge upset KO win over a certain World Boxing Foundation (WBF) European and International Champion last year.

Local lad Kenny Allan faces Chadwell Heath, Surrey’s Jordan Smith in the opening contest of the night, Allan will be looking to secure his second victory in his fledgling career, whilst Smith will be seeking to get the first win on his record on this just his third pro outing.