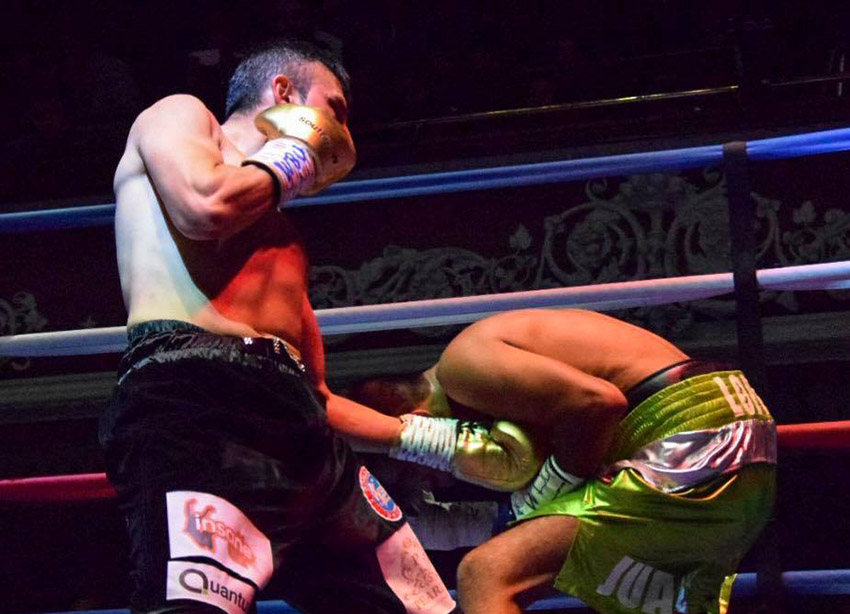 On Saturday night Internationally acclaimed promoter Prince Stanley Williams, who normally promotes events in the USA and Africa, made his UK promoting debut and boy oh boy did he do it in style. The event, titled The Homecoming, took place at one of the most stunning venues in the UK, St George’s Hall in Bradford, the hometown of headliner and defending World Boxing Union (WBU) World Super Flyweight Champion Tasif Khan.

Clearly determined to make a serious impact on the British boxing scene, the Prince had stated prior to the event that he was coming for Matchroom Sports head honcho Eddie Hearns’ Crown as the top UK promoter and without doubt backed up that bold statement by not just having the one World Championship contest on the card, but three plus an International title fight and a pair of International Heavyweight contests.

The first round was an edgy affair which see both protagonists tentatively testing the others mettle   with some sharp jabs and stinging combinations, which generated some great back and forth action for the fans.

Round two saw Khan step up the pace a tad as well as start targeting the body of the tough Mexican. Martinez is tough, not only did he absorb and counter but as the round progressed began deliberately dropping his guard and motioning Khan in, which the Bradford man happily obliged with massive left hooks.

The next round was not far off a repeat of the second, some fantastic back and forth action interspersed with Khan firing massive Exocets to the Mexican’s body.

Round four though was a very different affair, as once more Khan stepped up the pace and used his sensational ring craft to avoid many of Martinez’s attacks before countering with shots to body and head.

As the round moved into the second minute Khan landed a peach of a shot that sent Martinez down. The Mexican was soon on his feet and Khan went in hard and fast, however Martinez is no mug and used his ringcraft to avoid more body shots, well, that was until about thirty seconds of the round to go, when Khan found another opening and powered in a massive hook to the body to send Martinez down for a second time in the round.

On the restart once again Khan tried to finish it off as he backed Martinez onto the ropes, the Mexican covered up well and absorbed most shots with his arms or gloves which enabled him to make it to the end of the round.

The moment the bell rang for the fifth round Khan confidently moved to centre ring and began targeting Martinez’s body, the Mexican initially neutralised most with his excellent defence, however after about twenty seconds or so Khan found an opening and let rip with another massively fast and powerful hook to send Martinez down again, this time though there was no coming back for the Mexican and Referee Arno Pokrandt had no option but to waive the fight of on the twenty nine second mark of the fifth round.

Right from the opening bell Castaneda went hard and fast on the attack, Davidson began countering to try and keep the hard charging Mexican at bay, but no chance of that as Castaneda just walked through all punches coming in his direction.

As the round progressed Davidson began to gain a semblance of control and on occasions mounted attacks of his own, however Castaneda just kept coming forward and to my mind had without doubt had secured the first stanza.

Round two was in similar vein to the first, however I should mention that Davidson was definitely firmly in the driving seat due to not just his sensational counter attacks but also his much tighter defence in this round.

The third see Davidson confidence rise, as the Nigerian began to take the fight to the highly mobile Mexican, this was a round for the fans without doubt as it was non-stop action from start to finish.

The fourth saw Castaneda come out hard and fast, Davidson stood his ground and some great toe to toe action ensued, up to about the thirty second mark when Davidson let rip with a massive body shot to send the Mexican down. Castaneda attempted to rise but was clearly struggling and dropped to the canvas once more just as the count reached eight leaving referee Kornellius Bernds no option but to stop the contest on the forty second point of the fourth round.

What a fight this was, there is absolutely no way I can do justice for this in my report, it really was a fantastic all action affair of magnificent proportions.

Solano clearly came into the fight with an attack, attack and attack strategy as that’s just what he did for virtually every minute of every round, however have to also say Olagbade’s Mayweather like defence was virtually impenetrable and his countering was bordering on the sensational, to my mind the Nigerian’s boxing style isn’t just a mirror image of Floyd Mayweather’s, as has been stated previously, but actually the Nigerian has taken this style of boxing to another level.

After twelve fantastic rounds it was to the scorecards, Judges Jonathan Pasi and Kornelius Bernds both scoring the contest 116-112 and Judge Thomas Hakenberg scoring it 118-111 in favour of Olagbade.

When the result was announced the crowd made their feelings apparent to all, as most in attendance had clearly believed that Solano had done enough to secure at least a draw if not the win due to his non-stop approach.

If ever there was a fight that deserves a rematch, this is it without doubt as yes I too have to admit I was disbelieving at the scores also, but for a different reason. It was a seriously close fight in my eyes, one which I personally scored as just a single round splitting them.

Right from the off Kamoko took the fight to Bilgetekin, facing the German into having mainly to counter off the back foot. Don’t get me wrong it wasn’t all one way traffic, but Kamoko’s class was clear for all in attendance to see as he worked the German hard with big lefts and rights.

Bilgetekin neutralised a lot of Kamoko’s attacks in the second and as such enjoyed far more success in his attacks, however the Ghanaian cooly went about his work landing shots with precision and power, so much so that he had done enough to secure the second round too in my opinion.

Much the same during the first minute of the third, but as the round entered the second minute Kamoko struck in cobra like fashion, sending Bilgetekin down hard. The German was clearly in distress, so much so that Referee Kornelius Bernds stopped the count and beckoned the ringside medical team into the ring.

I’m pleased to write that Bilgetekin was fine, just in a lot of pain from the powerful impact to his lower rib. Official time of the stoppage was one minute and thirteen seconds of the third round.

The second fight of the night was an eight round all German Heavyweight contest between Frankfurt’s Rad Rashid and Wipperfurth’s Hasan Kurnaz.

What a round, these big Heavyweights were really going for it right from the very start, both protagonists letting rip with massive power punches at every conceivable opportunity. As the round progressed into the final minute Rashid stepped up the pace and shortly after caught Kurnaz with a peach of a shot that sent him crashing to the canvas.

Kurnaz tried but just couldn’t get to his feet in time to beat Referee Jody Meikle’s count. Official time of the stoppage was two minutes and thirty none seconds of the first round.

Opening fight of the night pitted Germany’s Avni Selimi against Lithuania’s Thomas Vaicickas in a six round Heavyweight contest and what a cracking all action battle it was.

Right from the off both warriors locked horns, both seemingly dismissing any thoughts of defensive tactics from their minds as they battled it out at close quarters for virtually the full three minutes. Have to say I scored the round a draw, and having seen referee Jody Meikle’s scorecard know that so did he.

The second round, whilst not quite the all action affair as the first, see Selimi start to stamp his authority on the contest with good movement as well as picking his shots for maximum effect. All in all another very watchable round, which, I have to admit doesn’t tend to be the case in most Heavyweight fights.

So going into the fourth it was all equal on the scorecards, they both had a round each and of course had drawn first round. Once again both protagonists seemed to dismiss any thoughts of defence from their minds and for the first thirty seconds or so mirrored the sensational first round, then as the clock headed towards the second minute Selimi let rip with a big heavy right to the body that sent the Lithuanian down.

Vaicickas made the count and on the restart Selimi went in hard and fast clearly determined to finish the fight early, Vaicickas defended as if his life depended on it but to no avail as Selimi let rip with another massive body shot to send the Lithuanian down, this time Vaicickas didn’t make it to his feet before referee Jody Meikle’s count came to it’s conclusion. Official time of the stoppage being one minute and twenty seven seconds of the fourth round.

What a night, fantastic fights and stunning venue, I have to admit if this is the level of fare that Prince Stanley Williams and his Monarch Events and Promotion’s team are going to bring to the table then I think the established UK promoters need to watch their backs as it’s just a matter of time before the Prince becomes the King of British Boxing.