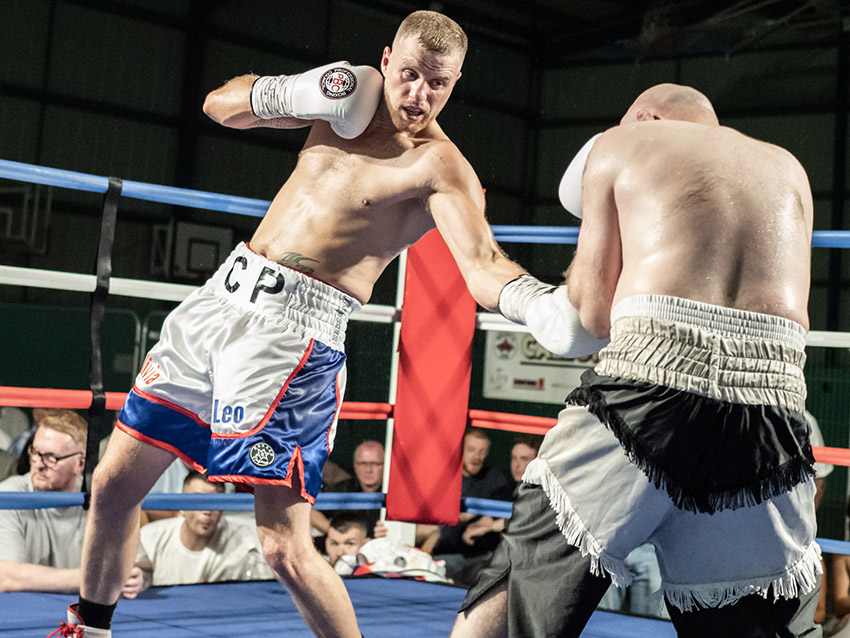 Last Saturday night, at the Hoops Basketball Centre in Barrow-in-Furness, local prospect Callum Pearson made a successful return to the fray, following an eighteen month sabbatical from the sport, and scored a sensational shut out points victory over Belfast’s Marty Kayes.

From the opening bell Pearson cooly controlled the contest, utilising his reach advantage and slick ringcraft to keep the Irish battler on the back foot for much of the fight. Whilst yes Pearson controlled the majority of each round Kayes showed the crowd that he hadn’t come to just make up the numbers as he pushed the local lads strong defence to the limit, so much so that many ringside fans became quite nervous at times, which they vocalised with volume.

“It was good to get back in the ring after 18 months out, due to a shoulder injury, and where better to do so than in my home town.

“Marty is as tough as old boots so I knew I had to keep him at arms length and use my class also it my first 6 round fight and I felt I done it comfortably.

“Wanna thank all my family and friends for supporting such a great night and even bigger thank you to my girlfriend for everything she does for me.”

Co-headlining was another local lad, Lee Kellett against very late replacement Latvia’s Mareks Kovalevskis in an eight round non-championship contest when his original Commonwealth title opponent Ghana’s Isaac Paakwasi Ankrah failed to make the trip due to visa issues.

Kellett really had his hands full with the energetic all action Latvian, control of the bout switched constantly, so much so that going into the eighth and final round Kellet was up on the referees scorecard by just a single round.

Two minutes into the final round, which Kellett appeared to be winning, Kellett stepped back to avoid a big shot from Kovalevskis and his legs just seemed to give way, luckily not to the canvas but onto the second rope.

However when Kellett tried to stand his legs just folded, leaving referee Lee Murtagh no option but to stop the contest and call for the medical team to enter the ring to tend to the stricken big Cumbrian.

The local fans applauded when Kellett finally was able to get up from the corner stool, and more sportingly, showed vocally showed their appreciation to the victor Kovalevskis when his hand was raised.

Prior to the two co-headliners being in action there was due to be an International Heavyweight contest between Metin Turunc from the Turkish Republic of Northern Cyprus and Belfast’s Ryan Kilpatrick, however shortly before the fighters were due to make their respective ring-walks Kilpatrick fell ill from food poisoning.

The failure of the Turunc-Kilpatrick contest to go ahead see the scheduled fourth fight, Aberdeen’s Lee Mcallister versus another very late replacement Dmitrijs Ovsjannikovs from Latvia, elevated to the number three slot on the schedule.

The highly decorated McAllister is a four time, four division World Champion and as such seeing him boxing in a four rounder must have surprised more than a few in attendance.

Unsurprisingly McAllister controlled the first round with ease. As the second round progressed Ovsjannikovs confidence increasingly grew and around the second minute of the round launched an attack, landing a tasty shot, McAllister’s response was a lightning fast hook to the body that forced the Latvian to take a knee. No matter how hard Ovsjannikovs tried he could not get back to his feet, leaving referee Lee Murtagh no option but to waive the fight off on the 2 Minute 20 Second mark of the second round.

Opening the pro section of the show was Aberdeen’s Nathan Beattie against yet another late replacement, Latvia’s Ritvars Krauklis, after original opponent Ben Ankrah failed to make the trip from Ghana.

For the first couple of minutes of the opening round both fighters really went for it, then as the second minute of the round loomed Beattie landed a peach of a shot that sent Krauklis reeling backwards and onto the ropes.

Beattie literally launched himself at the Latvian on the ropes, letting rip with a flurry of huge lefts and rights, the final shot sent Krauklis partially through the ropes. The plucky Latvian tried to manoeuvre from between the ropes but failed in his attempt due to a clearly painful injury to his left arm, that was sustained when he went through the ropes.

Plaudits to the Assassin Promotions team for overcoming all the obstacles that almost forced the event to be rescheduled, as all in all it was a fantastic event, have to say not just because of the fights, praise should also go to the audience too as they were so enthusiastic throughout, even in the breaks, the Cumbrian fans, lead by the MC Alan Moses and the Ring Card Girls, enjoyed themselves singing and dancing along with the music.