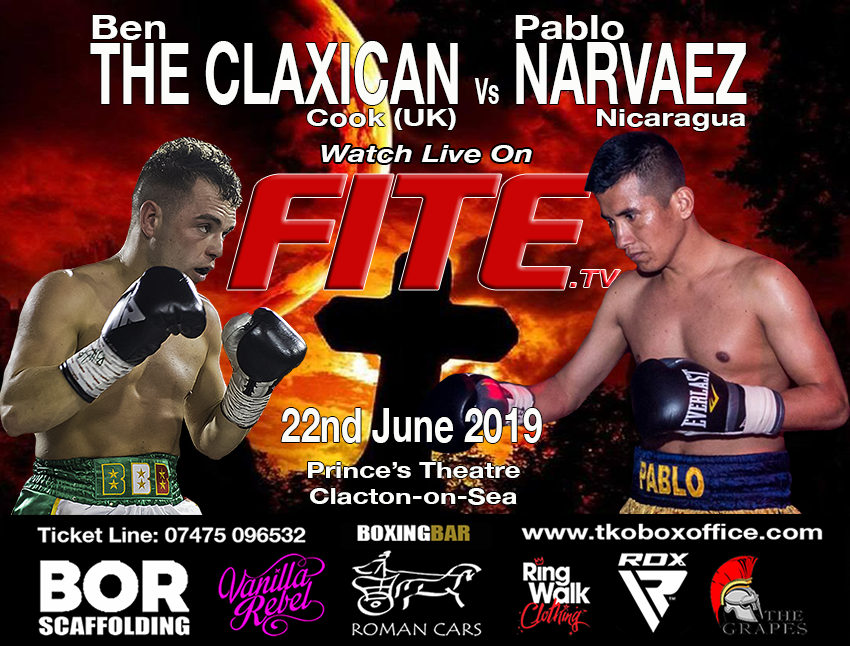 This coming Saturday Ben ‘The Claxican’ Cook steps into the ring at the Prince’s Theatre in Clacton-on-Sea, where he’s set to go toe-to-toe with Nicaraguan Pedro Narvaez, on the undercard of the Nathan Decastro versus Tommy Jacobs World Boxing Union (WBU) and World Boxing Foundation (WBF) Super Middleweight World Championship contest, which will be broadcast live on FITE.TV.

Back in November Cook made his professional debut at the Prince’s Theatre, against fellow debuting Chris Wong from Belfast and is clearly pleased that he will be fighting in his home town again on Saturday, as he said:

“Saturday can’t come quick enough for me. I’ll be fighting in my home town and it’ll be on TV, it doesn’t get much better than that.

“I don’t mess around in my fights anyway, I always go to war.

“But this one I’ve had his manager in my ear continuously, so this is going to be a war like no other.

“I’m relentless in my attack, I’ll be showing him why I have the  nickname ‘The Claxican”.

“It’ll be short and sweet, He’ll be very lucky to make the final bell.

Ben ‘The Claxican’ Cook vs Pablo Narvaez is on the undercard of the Nathan Decastro versus Tommy Jacobs for the World Boxing Union (WBU) and World Boxing Foundation (WBF) Super Middleweight World Championship Unification that headlines the event at the Prince’s Theatre, Town Hall, Station Road,, Clacton-on-Sea CO15 1SE on Saturday 22nd June 2019,

In addition to the two Championship contests there are  further International non-championship bouts and all contests will be broadcast live on FITE.TV, the full fight card is: