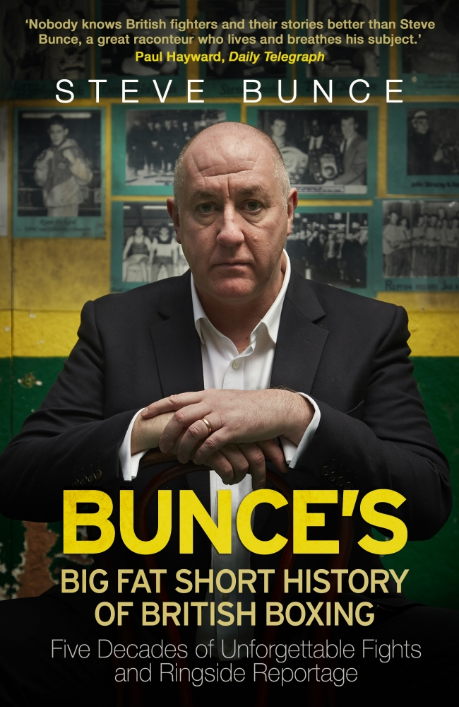 THE MAN HIMSELF STEVE BUNCE HAS A NEW BOOK OUT TODAY – BUNCE’S BIG FAT SHORT HISTORY OF BRITISH BOXING.

Boxing is Steve Bunce’s game. He has filed thousands and thousands of fight reports from ringside. He has written millions and millions of words for national newspapers previewing boxing, profiling boxers and proselytising on the business. He has been the voice of British boxing on the airwaves, both radio and television, with an army of loyal fans. And now it’s time to put those many years of experience into penning his history of the sport of kings on these isles. It’s Bunce’s Big Fat Short History of British Boxing.

Starting in 1970, the beginning of modern boxing in Britain, Bunce takes us from Joe Bugner beating Henry Cooper to an explosion then in the sport’s exposure to the wider British public, with 22 million watching Barry McGuigan win his world title on the BBC. All boxing royalty is here – Frank Bruno taking on Mike Tyson in Las Vegas; Benn, Watson, Eubank and Naseem; Ricky Hatton, Lennox Lewis and Calzaghe; Froch and Haye – through to a modern day situation where with fighters as diverse as Tyson Fury and Anthony Joshua, we have more world champions than ever before. And besides the fighters, there are the fixers, the managers, the trainers, the duckers and divers…

Bunce’s Big Fat Short History of British Boxing will have every high and impossible low, tragic deaths and fairy tales. It is a record of British boxing, British boxing people and fifty years of glory, heartache and drama.

The book is in the shops today and costs £18.99 – a must read for all British Boxing Fans as well as those involved in the sport here.