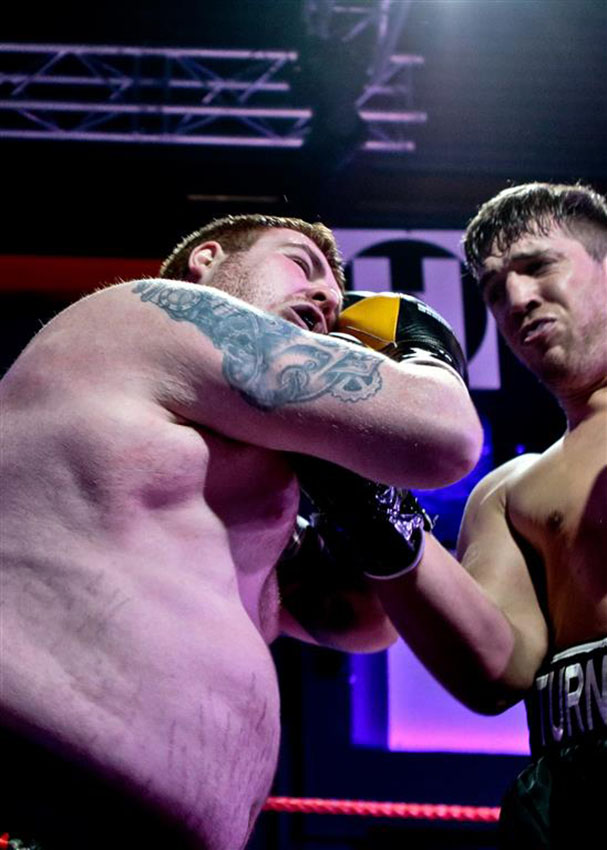 On Friday evening, just 24 hours before local hero Tony Bellew’s showdown with David Haye, Merseyside fight fans turned out in force for a little pugilistic aperitif at Hanger 34 in Liverpool for an event hosted by local promoter Kyle Gallagher.

Boy oh boy were they in for a cracking night of boxing to whet the appetite for the big fight, as in terms of action and drama the fights themselves were quite possibly not that far off being on par with those from the 02 in London the following night. Heading up the event was local unbeaten prospect Dayle Gallagher, in action against Northern Ireland’s Michael Kelly, however as the Liverpool lad had elected to open up the professional element of the show, for a change I’m starting the report from the first fight rather than last.

Right from the off Gallagher took centre ring and began to pressure his more experienced opponent. Kelly though used his vast experience to good effect to contain the fast starting scouser.

As the round progressed opportunities arose for Gallagher to let rip with some cracking body-shots, Kelly though is well schooled defensively wise, which prevented the young prospect getting too many opportunities before the end of the round.

Round two was a much more open affair, so much so that there was some great toe-to-toe action, much to the delight of the assembled crowd.

Gallagher started to get into a good flow in the third, often backing Kelly up before letting rip with short sharp flurries to body and head. The Irishman held his ground and comfortably boxed his way out of trouble on numerous occasions.

More of the same in the fourth, albeit being fought at higher pace compared to the earlier rounds, Gallagher backing Kelly up before letting rip with combinations to body and head, as before Kelly countered with good effect.

With the fans egging their man on, the pace in the final minute or so was nothing short of frenetic, with both men landing some seriously heavy shots as they slugged it out.

After four highly entertaining rounds, it was Dayle Gallagher’s hand held aloft by Referee Matt Scriven, who scored the bout 40-37. What a fight, McConville really was impressive in his controlled approach, taking the fight to the Irishman and dictating the proceedings for much of the time.

Considering it was his debut pro contest, the youngster had the confidence to showcase his skills to great effect, throughout the fight McConville was able to cut off the ring in style before landing some classy combinations as well as some seriously big shots.

Don’t get me wrong it wasn’t all one way traffic, Townley is always game for a good scrap and was more than happy to trade shots, landing some crackers of his own, but it was the young Liverpool lad that was definitely in control.

Townley got cut from a big punch late in the third, which seemed to ignite the blue touch paper for the young Merseysider, who noticeably stepped up the pace.

In the final round McConville kept up the pressure, backing his opponent up on numerous occasions before letting rip with big shots, followed by some classy combinations.

In the final thirty seconds of so of the round McConville stepped up the pace once more and backed the Irishman onto the ropes before letting rip with a torrent of power shots, Townley struggled to counter so opted to cover up, with no counter punches in sight from the Irishman, referee Matt Scriven had no option but to step in and stop the fight on the two minute and forty five second mark.

Next up was the highly anticipated Heavyweight bout between Sean Turner (1-0-0) and Belfast’s debuting Ryan Kilpatrick.

What a cracking contest, for as long as it lasted that is, both lads went to war right from the opening bell. The crowd were on their feet as the big men went toe-to-toe, each letting rip with a salvo of powerful exocets.

As the clock edged towards the second minute, Turner found the slightest of openings, stepped back a touch and let rip with a massive shot to the body to send the big Irishman to the deck. Amazingly Kilpatrick managed to get back to his feet before the count concluded.

Right from the restart Turner went on the attack, letting rip with further big shots, the final salvo producing a pin point accurate massive shot to the oblique that sent Kilpatrick to the canvas for a second time.

Unfortunately no matter how hard the Irishman tried to get up in time to beat the count again, he just couldn’t do it, leaving referee Matt Scriven no option but to wave off the contest on the one minute and twenty six second mark of the first round.

Side note on this bout, both men really did excel, the quality of the shortened fight was nothing short of sensational. I for one can’t wait to see both fighters in action again and hopefully in the future against each other once more. The final fight of the night see unbeaten Craig Kennerdale in action against the highly entertaining and experienced Irishman Marty Kayes.

Right from the off Kayes went on the front foot, taking the fight to his younger opponent. The savvy Irishman then proceeded to make life as difficult as possible for Kennerdale.

Kennerdale responded well and as the round unfolded managed to get himself on equal ground, which wasn’t easy as Kayes kept digging into his well stocked locker for shots, and let’s say entertaining ‘professional’ moves, to throw a spanner in the works and disrupt the Merseysider’s game plan.

As the second round progressed Kennerdale began to turn the tables on the Irishman, showing Kayes that he too has a well stocked bag of tricks and clever moves, so much so that for long periods of time he was able to keep the wily Irishman on the back foot.

More of the same in the third, however the forth was a much closer fought affair, with the upper hand being equally shared between the two protagonists throughout the round.

Top class event featuring closely matched all action fights, what more could anyone ask for, as such plaudits to promoter Kyle Gallagher for hosting what can only be described as the perfect prelude, for the Merseyside fans that is, ahead of the impending big London fight night.